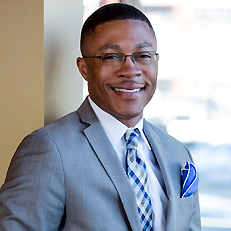 Kevin D. Johnson, president of Johnson Media Inc. and a serial entrepreneur, has several years of experience leading his multimillion-dollar marketing and communications company that now serves many of the most notable Fortune 100 businesses. As an innovative leader, he has appeared on ABC’s Good Morning America, CBS, and in Forbes, The New York Times, FastCompany, SUCCESS, and The Wall Street Journal. Moreover, he has appeared on CNN frequently. Kevin published the bestselling book, The Entrepreneur Mind, which was featured on the “Best Entrepreneurship Books of All Time” list by BookAuthority.

Hailing from Boston, Massachusetts, Kevin attended Morehouse College in Atlanta, Georgia, where he studied computer science as a NASA scholar and Spanish, graduating with honors.  Kevin later obtained an MBA from MIT’s Sloan School of Management where he was a Leadership Fellow. He is currently a lecturer at MIT and serves as a professional advisor for the Martin Trust Center for MIT Entrepreneurship.

Before founding his company in 2000, Kevin developed web applications and produced computer software for leading companies. He has been a software developer for IBM, CNN en Español, and Accenture. While in college, he started Johnson Media Inc., which in 2000 created one of the first online content management systems, called OmniPublisher. He later sold it to a publishing company, earning the distinction as a social media pioneer. Realizing the tremendous opportunity in applying Internet technologies to media and marketing, he decided to focus his business on this growing market.

Kevin was also the director of economic gardening for the Technology Association of Georgia (TAG), one of the nation’s largest nonprofit trade organizations for technology. In this role, he was responsible for leading an innovative approach to economic development that focused on providing resources to high-tech businesses located in Georgia’s coastal region. Similarly, he was a business mentor for Creative Startups based in New Mexico, helping entrepreneurs in the leading accelerator for creative companies.

In 2015, Kevin was invited to the White House for a special event regarding entrepreneurship with President Obama and other dignitaries such as Mark Cuban, owner of Dallas Mavericks; Steve Case, Chairman and CEO, Revolution, LLC and Co-Founder of AOL; Brian Chesky, Co-Founder and CEO, Airbnb; and Rich Barton, Founder, Expedia, Zillow and Glassdoor.  The White House brought together approximately 100 emerging entrepreneurs from across the United States and around the world to recognize them, to create innovative solutions to world challenges, and to highlight the importance of the President’s commitment to helping young entrepreneurs.

In his spare time, Kevin enjoys lecturing around the world, serving on boards, volunteering for nonprofits,  listening to salsa and jazz, playing piano in his Latin band, reading, golfing, traveling, and running marathons. He is a member of the Apex Society, a former board member of the Atlanta Business League (ABL), and a recent teaching fellow in the engineering postgraduate program at Anáhuac Mayab University in Mérida, Mexico. He lives with his wife and three sons in Alpharetta, Georgia where he is a commissioner.

10 Interesting Facts about the Author

Kevin in front of the cameras

Who should read The Entrepreneur Mind?

This book is for a wide range of individuals who are excited about entrepreneurship and business.  The range includes those who are thinking about starting a business and those who have been in business for decades. There is something for everyone.  More specifically, I think people who are considering starting a business or just starting their own business will benefit most from reading this book.

What is unique about this book and why should people read it? No other book about entrepreneurship examines how elite entrepreneurs think.  How we think affects our actions; and our actions determine our fate.  This principle is especially true in business.  The Entrepreneur Mind offers simple, digestible concepts that entrepreneurs must master to reach a high level of success. The book is pragmatic, not theoretical.  Every reader will gain new ways of thinking that will help to improve his or her business.

Why did you write this book?

In March of 2012, I started a business blog that discussed various ways that successful entrepreneurs think.  The blog became popular with readers from all around the world and received tens of thousands of pageviews within weeks. Before long, I was encouraged by some of my readers to write this book.  Furthermore, I wanted to provide a comprehensive body of work and advice for the many people that I mentor.  Ultimately, I think publishing this book and extending The Entrepreneur Mind brand in other areas are great ways to teach entrepreneurial concepts.

You were offered a publishing deal by a major publishing house. Why did you decline it and have your company publish the book?

My company, Johnson Media Inc., has been in the publishing business for over twelve years, and my company has the experience and success of launching and marketing projects like this. It’s a major part of what we do.  Although major publishing houses and agents were interested in my book, I thought it was best for my company to have creative control and to retain the rights of the content.  That way, my message will get to readers in its purest form and without any hindrances. Moreover, the publishing industry has changed drastically, giving the advantage to authors who want to sell directly to consumers.  In short, I felt that having a major publishing house for this book didn’t give it an advantage in the marketplace. Instead, it gave it a disadvantage.  Not to mention, I am an entrepreneur.

Where can people buy the book?

Beginning on Tuesday, March 5, 2013, you can purchase the book on Amazon.com and in book retailers like Barnes & Noble.  However, the book is now available for purchase on our web site at TheEntrepreneurMind.com.  Those who pre-order through our web site will receive a personalized, signed copy and special offers.